FlipBoard on the iPhone

The moment I almost made my decision it is time for a new phone Mike McCue comes out with a new version of FlipBoard. For all of you who have not been working with FlipBoard already, Flipboard is a new and very quick way to read information like it was in a newspaper. For none iPad users the issue was that it was only available on the iPad. Now Mike McCue, CEO at FlipBoard announced the iPhone version.

This is making my decision to move from iPhone to Android a little harder. My phone is currently not able to keep up with the processing demand of the apps that are released and due to this I am in "need" of a faster phone. Looking at Android it made a good impression and convinced me that I would switch from iPhone to Android. The release of FlipBoard makes this however again something to consider. 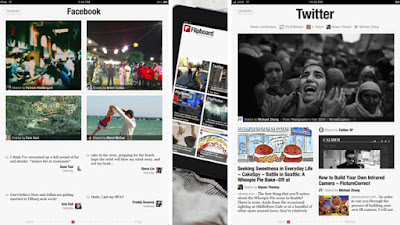 wikipedia:
Flipboard is a social magazine application and company founded in 2010 by Mike McCue and Evan Doll, based out of Palo Alto, California in the United States for Apple's iPad tablet computer. The application is designed to collect the content of social networks and other websites and present them in magazine format on the iPad. The application is designed specifically for the iPad's touch screen and allows users to "flip" through their social networking feeds and feeds from websites that have partnered with Flipboard.
Posted by Johan Louwers at Wednesday, December 07, 2011

Amazing article and very interesting stuff you got here! I definitely learned a lot from reading through some of your earlier topics as well and decided to drop a comment on this one!