The future of the small cloud

When talking about cloud, immediately the thoughts of Amazon, Azure and Oracle Cloud comes to mind by a lot of people. When talking about private cloud the general idea comes to mind that this is a model which is valuable for large customers running hundreds or thousands of environments and which will require a large investment in hardware, software, networking and human resources to deploy a private cloud solution.

Even though the public cloud provides a lot of benefits and relieves companies from CAPEX costs in some cases it is beneficial to create a private cloud. This is not only the case for large enterprises running thousands of services, this is also the case for small companies. Some of the reasons that a private cloud is more applicable then using a public cloud can be for example:

There are more specific reasons that a private cloud, or hybrid cloud, for small companies can be more beneficial than a public cloud and can be determined on a case by case base. Capgemini provides roadmap architecture services to support customers in determining the best solution for a specific case which can be public cloud, private cloud or a mix of both in the form of a hybrid cloud. This is next to more traditional solutions that are still very valid in many cases for customers.

One of the main misconceptions around private cloud is that it is considered to be only valid for large deployments and large enterprises. The general opinion is that there is the need for a high initial investment in hardware, software and knowledge. As stated this is a misconception. By using both Oracle hardware and software there is an option to build a relative low cost private cloud which can be managed for a large part from a central graphical user interface in the form of Oracle Enterprise Manager.

A private cloud can be started by a simple deployment of two or more Sun X4-* servers and using Oracle VM as a hypervisor for the virtualization. This can be the starting point for a simple self-service enabled private cloud where departments and developers can provision systems in an infrastructure as a service manner or provision databases and middleware in the same fashion. 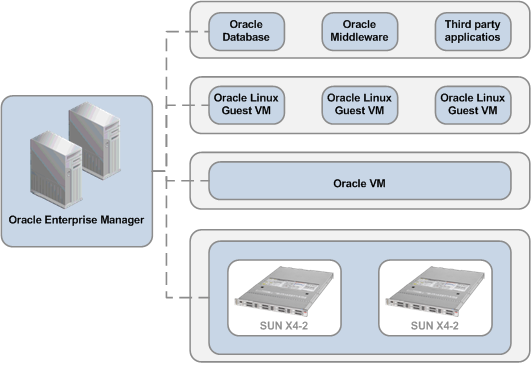 By using the above setup in combination with Oracle Enterprise Manager you can have a simple private cloud up and running in a matter of days. This will enable your business or your local development teams to make use of a private in-house cloud where they can make use of self service portals to deploy new virtual machines or databases / applications in a matter of minutes based upon templates provided by Oracle.
Posted by Johan Louwers at Sunday, September 28, 2014 No comments: