When you are starting to use the Oracle NoSQL key-value store solution you are not done by simply installing the Oracle NoSQL database. Installing the database is quite simple and straightforward. It is a matter of deploying the software, run a commandline configuration wizard and start the NoSQL deamon. The next step before you can start using the NoSQL implementation is to configure your KVStore. During deployment you have created (most likely) a number of hosts running a NoSQL deployment. One of them is the KV Administrator node which runs a management webinterface on port 5001 (by default). Your first step should be to connect to this admin console.  The console will take you into a couple of steps.

As soon as you have completed the above step you will be presented with a screen similar to the screenshot above. On the right side of the screen you can see 3 steps are already completed with the state SUCCEEDED, namely; DeployDatacenterPlan, DeploySNPlan and DeplayAdminPlan.

Next is to deploy storage nodes. You will have to do this for every hosts you would like to deploy a storageNode on. Do note that on your admin node you already have a storage node deployed. You have to provide some needed information.

Datacenter: state the datacenter you want to deploy your StorageNode

Host: The network host name of the host you want to deploy your StorageNode on. This should be a host where you have deployed a Oracle NoSQL stack.

Registry Port: The port number where your KVstore is running on the target host.
Comment (optional): as stated, optional.

Now you have the option to use the Create Plan option which will store you plan for later execution or do a Create and Execute Plan which will directly deploy your StorageNode. When directly executed you will see in the right side of your screen the progress and (hopefully) a message for Plan-4 DeploySNPlan with status SUCCEEDED.

Next step is to deploy a store (Key-value store) on top of your storage node cluster so you can really start to use your Oracle NoSQL implementation. In the same screen as you used to deploy a StorageNode you can now select “Deploy a Store”which will deploy the store for you on all storage nodes or a sub-set of the storage nodes. Some details have to be provided:

Storage Node Pool: In this case we have selected AllStorageNodes to deploy them on all nodes available.

Replication Factor: The replication factor is something you have to think about before you quickly state a number (currently in the above screenshot you see 3, in our real-life example we use 2 as we only have 2 nodes). Replication factor states how many times a partition of data is stored in the cluster. When stated 3 it means that at 3 locations in your cluster a copy of a partition is stored.

When you have deployed your store it can be good to check your entire setup of your cluster with the topology browser. Here you can see how your configuration is done and how things are arranged. This topology screen can also be used during day-to-day administration to get a good view of the current status of your NoSQL deployments.
Posted by Johan Louwers at Tuesday, June 26, 2012 No comments: 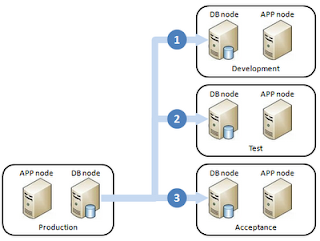 When using Oracle Enterprise Manager in your organization it will most likely be used by a number of people with all different kind of roles and responsibilities. DBA’s will be interested in the information from the database at first hand, Technical Application Maintenance consultants will most likely be interested in how the middleware is doing and infrastructure specialist will focus on their own parts of the stack.

Oracle Enterprise Manager provides you with a couple of standard dashboards which do provide a point from which you can start. Selecting a dashboard that is close to your role is the first step, after that you can customize your dashboard to show exactly what you want.

The below video shows how you can customize your dashboard. In this video you get a quick first impression to help you getting started.

Having a central Oracle Enterprise Manager system within your landscape will provides numerous benefits to your IT operations as well as to your business operations. It will however mean that you have one central point linking to all components and all systems will communicate with the centralized Oracle Enterprise Manager installation. Due to this reason it is of vital importance that, when implementing, a good portion of time is dedicated to security questions. To ensure save and encrypted communication and to ensure that users who are allowed access to the application have only access to what is needed for their role can be done via setup. One of the things you will need to consider at the beginning of the implementation of Oracle Enterprise Manager is how your users will be authenticated.

Repository-Based Authentication: This is the default authentication option. An Enterprise Manager administrator is also a repository (database) user.

By default the authentication framework will be using the Repository-Based Authentication schema to authenticate users during login. When operating with a rather small team of administrators this can be the best way of working. However, as team sizes grow it is advisable to investigate other options of authentication. My personal rule of thumb is that if the number of users using Oracle Enterprise Manager is more than 25 it is beneficial to look for more centralized solutions.