Disappointed about the future, disappointed that we do not have the type of cities that we where envisioning back in the 80s? Wonderin why we do not have swarms of droids flying over our cities at this moment running all kind of errands? Well, one of the things that is holding this drone thing back is the regulation by the US FAA (Federal Aviation Administration). However that might change very rapidly, the FAA announced that it will be allowing unmanned aircraft systems starting in 2015. You can read all about this announcement in this FAA news item.

It is already rumored that companies like FedEx are looking into drone systems which will deliver packages to certain locations. That means that in the future you might see a FedEx quadrocopter flying to your house with a package for you instead of a delivery truck pulling up to your front door. Also one of the things FedEx is looking into is transport flights between main transportation hubs by UAV's, you can read some more about this on the diydrones website. Below is a impression Boeing / cranfield concept UAV.

Next to transportation a new field is opening up for security drones. Secom is developing small security drones to patrol your property and make sure you have a view everywhere and a constant patrol. Having drones (on wheels or flying) to safeguard remote sites is something we probably will see more and more in the future.  You can rent a drone from Secom for $58 per month so that means it will become available to a large number of people and companies which will help the adoption a lot.

Having the new rules of the FAA in place by 2015 will possibly take us a step close to the city of the future where we see lots and lots of drones taking away some of the work of humans. The question will remain if this is a positive or a negative things for humanity and employment rates. 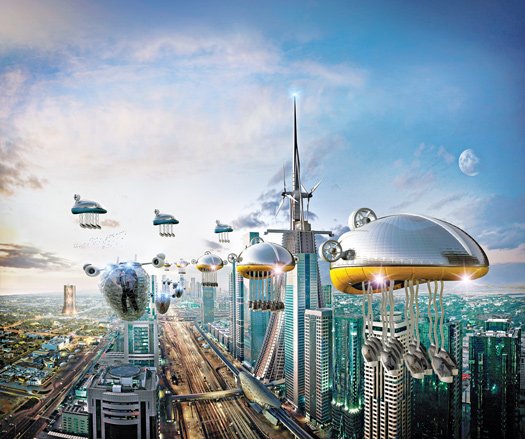