Microsoft windows is already using a task-bar since windows 95 where we all found it was a revolution. At least I was thinking that and I thought it was quite a smart move coming from pure command line and 3.11 systems.

Now we are all so used to task-bars and start buttons and we see them changing in the windows versions. we also see that other operating systems have adopted the same way of working in all kind of ways. The operating systems from Apple also has some sort of task bar at the bottom of the screen where you can launch new programs from when needed. Also Linux is providing you a task-bar like function.

Under Ubuntu it is called the launcher and this is alos used as some sort of task bar and a start menu. As I am used to mostly use Linux in a quite basic form and do the rest of my day-to-day work from my macbook or corporate Windows machine I have not ahd much time to play with the settings if the launcher. However, I am reinstalling one of my main workstations and removed solaris and installed Ubunutu to use it as one of my workstations for day-to-day use.

Changing the settings for the Ubuntu Unity Launcher is quite simple, you can install a configuration tool called compizconfig-settings-manager. You can simply apt-get the tool and change all the settings you like. 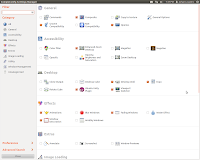 Email ThisBlogThis!Share to TwitterShare to FacebookShare to Pinterest
Labels: linux