For some strange reason I have agreed with a couple of people to think about how we could create content in the form of YouTube video’s. seeing this as an addition to the blogging I agreed that it would be nice to not only create content in the form of posts on my personal blog and the company blog as well as slidedecks on slideshare, however, start adding also video content to this mix.

In all honesty I have done some video content previously for internal and external use and I have to admit that I do not always feel comfortable with it. Looking back at some of the video files I can say that I feel I am not a video type. Having stated that, it turns out a lot of people experience the same feelings and emotions while watching themselves on video. A mix of awkward self-consciousness and vicarious embarrassment with the person you see on the video and realizing you are the person on the video. As it turns out, a lot of people are experiencing this and feel uncomfortable watching themselves on video including a long list of prominent TV and film personalities. Meaning, I am not alone in this apparently.

However, having made the promise to support and engage in the creation of a couple of video messages, the question came to me on how long a video should be. The initial thought was that a video, on a pure technical subject, should be around 20 till 30 minutes. A 20 till 30 minute video is considered a long video, unless you are Google TechTalk or TED, this might be a bit long to keep the audience engaged until the end of the video.

Based upon some research done by thenextweb it turns out that the length of the video is really important. Almost regardless of the type of content short video's keep people engaged. A short video is more likely to be watched in full. The below diagram from thenextweb shows the percentage of people that watch the full video in combination with the length of the video.

As you can see, a rapid decline in the average percentage of the full length video viewed is dropping with the length of the video. This means a couple of things; (A) if you want to state something important in your video you should do this directly at the beginning and (B) if you want to ensure people watch the full length of the video (or a large part of it) you have to keep it short.

Depending on the research you are reading the ideal length of a online video changes slightly. based upon what ADWeek states about this, a youtube video should be around 3 minutes, if you do a TED talk the ideal length is 18 minutes. 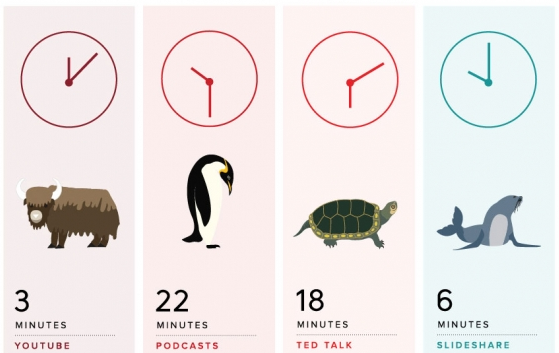 Other sources state that a YouTube video should be between 0 and 10 minutes. All in all, the general consensus between all research is that a video should be short. In fact, as short as possible and you should avoid long video content. Avoid it, avoid long video content because people will be less attracted to start a long video and people will be less motivated to watch the entire length of a video. It turns out that the concentration span of people while watching online video content is extremely short.

Given this information, and after some discussion internally, it has been decided that an Ignite way of doing things and building video content might be the best way of creating video content and get the message t the audience. The ignite concept is that presenters get 20 slides, which automatically advance every 15 seconds. The result is a fast and fun presentation which lasts just 5 minutes.More information on Ignite can be found at the ignitetalks.io website.