Oracle VM is the XEN implementation from Oracle which can be used as a hypervisor for virtualization of operating systems. Oracle VM could (should) be your standard choice when deploying virtualized environments that will be used to deploy Oracle products. Reason for this is that Oracle is only recognizing the hard partitioning of Oracle VM as a valid option with respect to their license policy.

Oracle is providing product certification for a lot of their products to make use of Oracle VM and the list is growing. On the list of certified products you can also find the Oracle RAC setup for production and none-production use. Oracle is even providing templates which ship Oracle Linux and a Oracle RAC implementation for quick deployment. 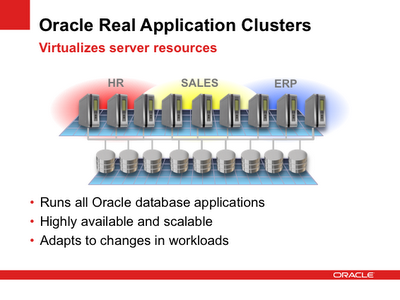 There are however some quite (un)documented things you have to consider when you deploy a RAC implementation on Oracle VM. A good read is the "Oracle Real Application Clusters in Oracle VM Environments" whitepaper from Oracle which is released in March 2012.