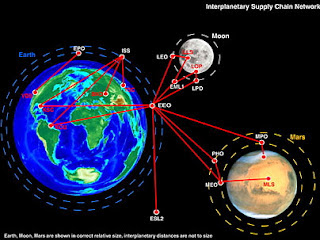 If you think shipping freight from Cincinnati to El Paso is challenging, imagine trying to deliver an oxygen generation unit from the Earth to a remote location on the moon.

By 2020, NASA plans to establish a long-term human presence on the moon, potentially centered on an outpost to be built at the rim of the Shackleton crater near the lunar South Pole.

To make such a scenario possible, a reliable stream of consumables such as fuel, food and oxygen, spare parts and exploration equipment would have to make its way from the Earth to the moon as predictably as any Earth-based delivery system. Or more predictably: One missed shipment could have devastating consequences when you can't easily replenish essential supplies.

The system is based on a network of nodes on planetary surfaces, in stable orbits around the Earth, the moon or Mars, or at well-defined points in space where the gravitational force between the two bodies (in this case, the Earth and the moon) cancel each other out. These nodes act as a source, point of consumption or transfer point for space exploration logistics.

"Increasingly, there is a realization that crewed space missions such as the International Space Station or the buildup of a lunar outpost should not be treated as isolated missions, but rather as an integrated supply chain," said de Weck. The International Space Station already relies on periodic visits by the space shuttle and automated, unpiloted Russian Progress re-supply vehicles.

While "supply chain" usually refers to the flow of goods and materials in and out of manufacturing facilities, distribution centers and retail stores, de Weck said that a well-designed interplanetary supply chain would operate on much the same principles, with certain complicating factors. Transportation delays could be significant--as much as six to nine months in the case of Mars--and shipping capacity will be very limited. This will require mission planners to make difficult trade-offs between competing demands for different types of supplies.

A reliable supply chain will "improve exploration capability and the quality of scientific results from the missions while minimizing transportation costs and reducing risks" to crew members, de Weck said.

SpaceNet evaluates the capability of vehicles to carry pressurized and unpressurized cargo; it simulates the flow of vehicles, crew and supply items through the trajectories of a space supply network, taking into account how much fuel and time are needed for single-sortie missions as well as multiyear campaigns in which an element or cargo shipment might have to be prepositioned by one set of vehicles or crew members while being used by another.

In addition to determining a logical route, SpaceNet also allows mission architects, planners, systems engineers and logisticians to focus on what will be needed to support crewed exploration missions.

To experience an environment as close as possible to harsh planetary conditions, MIT conducted an expedition to Devon Island in the Canadian arctic in 2005. The researchers established a semi-permanent shelter at the existing NASA-sponsored Haughton-Mars Research Station and compiled an inventory of materials at the base, including key items such as food, fuel, tools and scientific equipment, while carefully tracking inbound and outbound flights.

They also experimented with modern logistics technologies, such as radio frequency identification, that autonomously manage and track assets with the goal of creating a "smart exploration base" that could increase safety and save astronauts and explorers precious time.

For more information on SpaceNet 1.3, go to spacelogistics.mit.edu.