One generic function
When building an application using Google Cloud Functions which at several points need to interact with data in the Oracle ADW you do not want to code these multiple times. A more logical way of doing things is building one function to interact with Oracle ADW to obtain the needed data. 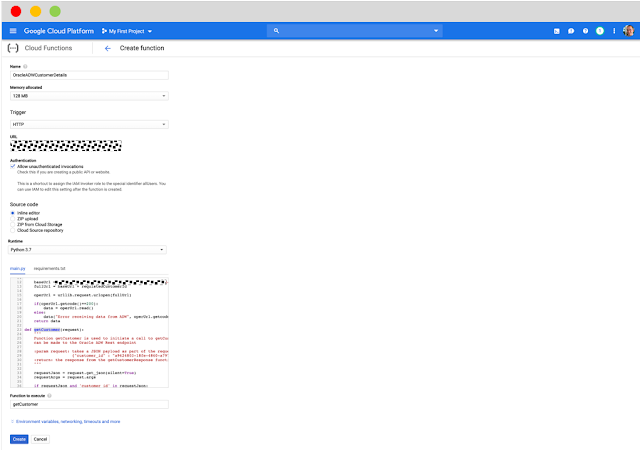 We indicate that we want to use Python 3.7 and that the function inside our code, which is the entrypoint for execution, is named getCustomer.

The code used is shown below. Do note; when developing a production solution you most likely want to add additional security and a lot more error handling than shown in this example. This is just a very (very very) not production ready example. Additionally, the full URL of the Oracle ADW has been substituted with XXXX

Testing the function
Upon deployment you can test the google cloud function using the test functionality in the Google UI (or by calling it directly) from another location. If all is working you should receive a JSON style return message as shown in the below screenshot. 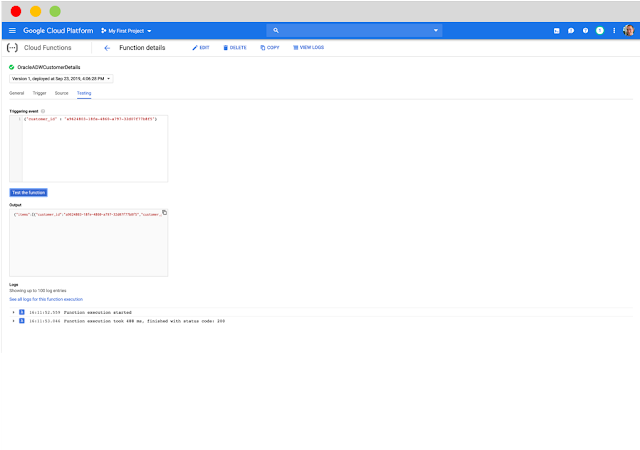 In the above screenshot the trigger event field contains our test JSON payload and the  function output contains a JSON response which originates for the Oracle ADW.

Conclusion
When developing applications on multiple platforms, multiple clouds and multiple technologies and you require access to one central source of the truth you can use multiple technologies to connect to a centrally located Oracle Autonomous Data Warehouse. However, using a REST interface is in most cases a very simple and "fit for the job" kind of solution.

When developing a solution like this it will require more strict error handling and it will require strict authentication and authorization however the base principle stands that hybrid multi-cloud applications can integrate with an Oracle Autonomous Data Warehouse in a very easy and cloud native manner.
Posted by Johan Louwers at Monday, September 23, 2019