Analysts state that edge computing is a technology trend with a medium business impact which we will see surfacing in 2017. 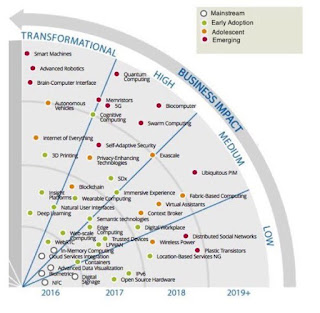 Even though the business impact is generally seen as medium it provides a large technology wise benefit and understanding the concepts of edge computing can be of vital importance, especially when you are developing IoT solutions or geographically distributed systems that rely on machine 2 machine communication

As an example, if you would do license plate recognition to decide if a security gate would open for a certain car you can architect this in a couple of ways. The “traditional” way of doing this is having a very light weight system which would take a number of pictures as soon as a car would trigger the camera. The pictures would then be send to a central server where a license plate recognition algorithm would extract the information from the picture and compare the result against a database to make a decision to open the security gate or not.

Architecting the same functionality with edge computing would involve a number different steps. In the edge computing model the car would trigger the camera and the pictures would be taken. A small computer, possibly embedded within the camera, would run the license plate recognition algorithm and only the result would be send to a REST API to check if the gate should be opened or should remain closed.

The benefit of edge computing in this case is that you would have a lot less data which needs to be communicated between the camera and the central server. Instead of sending a number of high resolution photos or even a video stream you only have to communicate a JSON object containing the license plate information.  By doing so you can limit the amount of computing power needed at the central location and at the same time improve the speed of the end user experience.

Such an example could be industrial (or home use) equipment which relies on the data collected by a set of sensors to make decisions. If we would take an industrial example this could be a smart skid in factory responsible for ensuring that a number of liquid storage containers are always filled to a certain extend and are always at a certain temperature and mix. 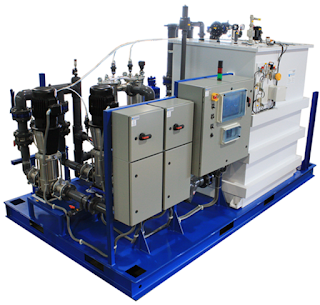 Such a skid as described above involves a large set of sensors as well as a large set potential actions on valves, pumps and heating equipment. Traditionally this was done based upon an industrial PLC in a disconnected manner where it was not possible to centrally monitor and manage the skid.

Certain architecture blueprints state that the sensor data should be collected more centrally to ensure a more centralized management and monitoring solution. The result of this is that all data is being send to a central location where computations are done on the received data. The resulting actions are being communicated back again. The result of this is that a lot of data needs to be communicated back and forward and a loss in communication can result is a preventive shutdown of a skid.

In an edge computing architecture, the skid would be equipped with a local computing power solution which would take care of all the computations that are in other cases done in a central location. All decision making would be done locally on the edge of the network  and a subset of data and a log of the actions being undertaken would be send to a central command and control server where the remote skid can be monitored and human intervention could be triggered.

In this model the loss of connectivity would not result in a preventive shutdown, the operations would be continuing for a much longer time given the operational parameters that the edge computer holds.

Oracle Cloud and MQTT
As already mentioned in the example of the remote skid, a way to communicate the data in a IoT fashion is using MQTT. MQTT stands for Message Queue Telemetry Transport, It is a publish/subscribe, extremely simple and lightweight messaging protocol, designed for constrained devices and low-bandwidth, high-latency or unreliable networks. The design principles are to minimize network bandwidth and device resource requirements whilst also attempting to ensure reliability and some degree of assurance of delivery. These principles also turn out to make the protocol ideal of the emerging “machine-to-machine” (M2M) or “Internet of Things” world of connected devices, and for mobile applications where bandwidth and battery power are at a premium.

On this blog we already discussed MQTT in combination with Oracle Linux and the Mosquitto MQTT message broker.

To facilitate the growing amount of IoT devices and the principle of edge computing which is relying on MQTT communication Oracle has included MQTT in the Oracle Cloud. Oracle primarily positions MQTT in combination with the Oracle IOT Cloud service in the form of a MQTT bridge. The Oracle IoT Cloud Service MQTT Bridge is a software application that must be installed and configured on Oracle Java Cloud Service in order to enable devices or gateways to connect to Oracle IoT Cloud Service over the MQTT communication protocol. 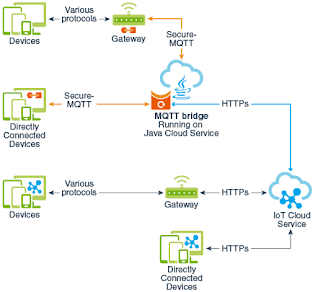 In conclusion
As already outlined in the above examples, processing a large part of the computations at the edge of the network and implementing the principles of edge computing will drastically reduce the amount of computing power and storage capacity you need in the Oracle Public Cloud. In many cases, you can rely on MQTT communication or HTTPS communication where you call a REST API.

By pushing a large part of the computations to the edge your remote systems and devices become more reliable, even in cases where network communication is not always a given, and the resulting services become faster.
Posted by Johan Louwers at Tuesday, June 06, 2017