The third IT wave

According to Pat the Mobile-Cloud Era is driven by Mobile, Cloud, Social and Big-data. We are currently only seeing the beginning of this however in the near and upcoming future this will become the default way of developing applications and running your infrastructure just like companies now primarily run there applications in a client-server fashion and in the way they where running the applications in a mainframe way before that.

Below is one of the slides used during the presentation; 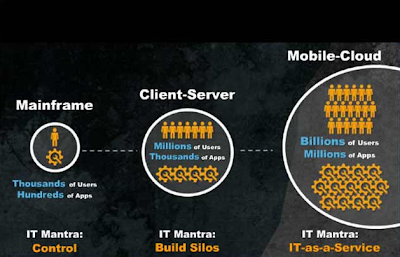 Interesting is that he also noted that the new IT Mantra of this era will be / should be ÏT-as-a-Service". The mantra "IT-as-a-Service" is adding to the growing influence of the business on IT and the declining pure IT decisions. Business users and departments do get more and more involved into decisions with regards to IT and will play more and more a prominent role within IT projects and decision making. This also, autocratically, holds that the role of the CIO within a company will stay as important as it is now however it will be less "powerful" as he/she will not have the final say in IT matters as it will be heavily influenced by the other board members.

Accoording to a recent Harvey Nash study "USA 2013 CIO Survey" the role of the CIO in the new Era will be more collaborative, business-facing and multi-skilled function is shifting the dynamics of the modern-day executive table.
Posted by Johan Louwers at Wednesday, September 04, 2013