Big-data is already around us in the market for some time now and to some people it is living up to the expectations and to some people it is still a buzzword representing a hollow phrase. Regardless of the fact if you are in the big-data believer or in the big-data skeptic group it is undeniable that data is growing at a rapid speed and that the need for ways of gathering, storing, computing and making meaning out of is also growing. Also it is a undeniable fact that the resources and computing methods to cope with the growing number of data are changing.

When looking from a business demand perspective to big-data and not from a technical perspective to the subject we will also see that big-data is essence makes a lot of sense and can bring a lot of good to a company if used and implemented correctly.

As a C level manager in a large enterprise it is vital to look at big data. There is a lot of money to be made or a lot of money to be lost for a company. Forbes released an article named "The Deadly Cost Of Ignoring Big Data: $71.2 Million Per Year" which in itself already has a catchy title however some of the content is even more breathtaking;

"If your company’s reluctant to tackle the Big Data challenge because you think it’ll be too expensive or disruptive, you might want to consider the alternative: companies without aggressive plans for managing and exploiting the explosion in data report they are losing an average of $71.2 million per year.That’s not a cumulative total; rather, that’s $71.2 million from each company. Every year."

As a C level manager this is something to consider, however what is of vital importance is how your competitors are doing in the big-data arena and if you still have time to ramp up. Oracle has done a recent survey 333 C-level executives across 11 industries. Below are some of the key findings;
When talking about big-data you first have to have a solid understanding of what big-data is and what it is to you, I have been publishing some blogposts on this subject already, below is what big-data is according to Gartner. The below graph is the Garter Hype Cycle for 2012 and you see that big-data is climbing up to the peak of inflated expectations. The expectation of Gartner is that it will take between 2 till 5 years before big-data will move up onto the plateau of productivity which is quite fast. 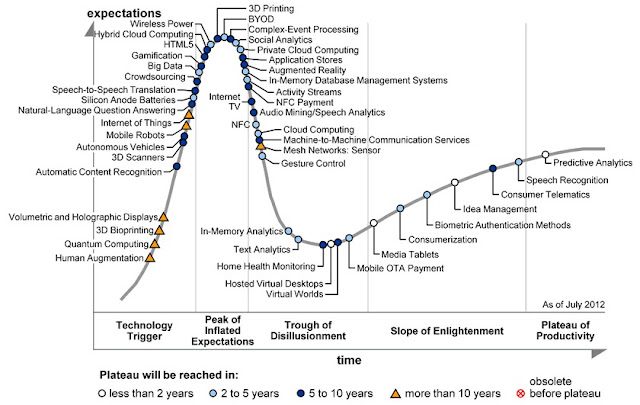 As we know big-data is a subject which is to big to be put on its own. Gartner has a specific hype cycle for the sub-components they think bog-data consists out of which can give you some guidance of where it currently stands and what the expected flow towards the plateau will be. 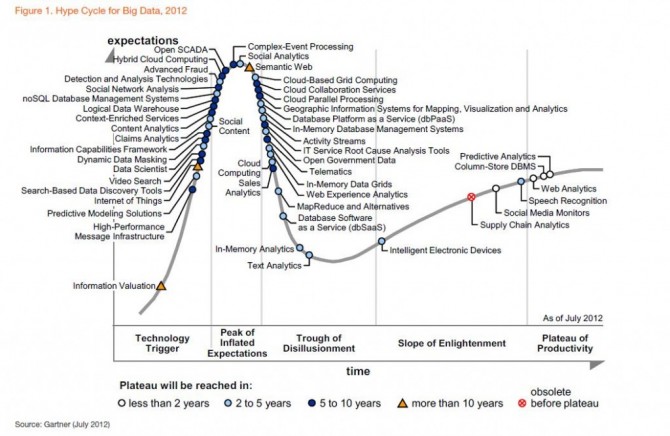 The hype cycles from Gartner can help enterprises to gain understanding of where big-data is moving and at the same moment can help IT companies to understand where enterprise will most likely be moving in the upcoming years in the big-data arena. As large numbers of large enterprises will start investigating and implementing some sort of big-data strategy and will be followed by mid sized companies it will be of vital importance for survival to make sure that your company is a least aware of the big-data move and how this will play a role of influence in your market segment. Companies who do not start looking into this in due time will suffer the financial consequences and finally might not survive missing he big-data boat.
Posted by Johan Louwers at Thursday, November 15, 2012

Looking for a good mover is a so hard and also we need to look for a good service and price.