It is beyond any doubt that the cloud way of things is picking up, more and more companies to tend to look at cloud solutions in one way or another. Some might even use cloud based solutions without even knowing it and in some cases enterprises are not aware that departments are using cloud based solutions on their own account. This last part is, or at least should, be a concern for the security department. You can better channel the use of cloud solutions then staying unaware of it or block it and find out that users find other ways of still doing it however in slightly different way.

What is interesting is to see how cloud is used and by what kind of companies. How they adopt the cloud way of thinking. Cloud is a given and it is not going away anytime soon. Now we can see how this is unraveling and is adopted in the daily way of doing things within companies.

A good source for such information is the survey from RightScale; " RightScale surveyed technical professionals across a broad cross-section of organisations about their adoption of cloud computing." one things however we have to keep in mind when reading those figures is that the list of people who have been send this survey are (A) technically knowledgeable and (B) most likely in some form a connection with RightScale and might be more cloud orientated then the average business user. Keeping this in mind the report is still providing a good point of view on the current adoption level.

One of the interesting things is that they show the adoption in a four level way between enterprises and small and medium businesses. For this they use the levels "POC/Experiment", "First project", "several apps" and Heavy use. This is used to show the cloud adoption within enterprises and SMB companies. What you can see from this is that the SMB market is already making much more use of cloud then the enterprises, 41% SMB usages of cloud against 17% in the enterprise section of the market. The levels used for the adoption are somewhat comparable with the cloud adoption model as shown below in a pyramid way of representing this. Int his model we use 5 levels instead of 4. Rightscale is not taking into account the virtualization layer which is represented as level 1 in the below pyramid. For the rest you could see "POC/Experiment" as level 2 Cloud Experimentation, "First Project" as level 3 Cloud Foundations, "Several Apps" as level 4 Cloud Exploitation and "Heavy Use" as level 5 Hyper cloud. 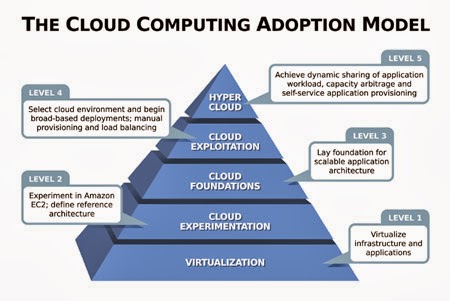 As we have seen form the above information the SMB market is more willing to adopt cloud computing in a "heavy" was and the majority of the SMB companies who use cloud computing do this in a level 5 Hyper cloud way. What is interesting however is that, based upon the RightScale 2013 report, there is not much relative difference between the number of enterprises and SMB companies who use cloud. 75% of all companies do make use of cloud computing, this breaks down in 77% of the enterprises and 73% of the small and medium businesses. 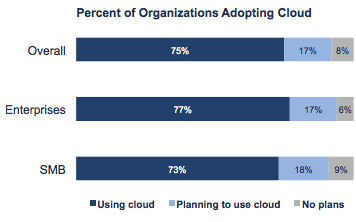 This would hold that the percent of enterprises using the cloud is higher however that they less advanced in the level of adoption of the cloud computing platform. Small and medium business are lacking behind a little however when they start adopting the cloud they tend to go in much more aggressive and move very quickly into a higher rate of adoption.

One of the reasons for this could potentially be that cloud computing is picking up at the moment and needs to find its place. We are still in the "client server" area of computing and where enterprises tend to move slower and have in general more and complex systems then small and medium businesses it takes longer to move to the "cloud and mobile" area. Next to this small and medium businesses tend to have a less complex chain of command and decisions can be made more quicker and without the sometimes complex bureaucracy of large enterprises.

This means, small and medium businesses are more agile and can move quicker into new technologies then enterprises. An additional complexity for adoption is that the amount of money involved for an enterprise is in general much higher then that for a SMB company due to the scale and complexity of the applications used.

What we however see is that large enterprises are very much willing to adopt cloud computing however it takes longer to implement this solution. However, the market for enterprise cloud computing is opening and should be a focus point for all companies who do sell cloud solutions in one form or another.
Posted by Johan Louwers at Saturday, September 21, 2013