When connecting to a remote Linux server over SSH you have the option to create a tunnel from the remote server back to your local workstation. This can be very handy in case you, for example, need to map the port from the remote server to a localhost port on your workstation. For example, if the only allowed connection is SSH to the server and port 1521 is running on the server for the database you will not be able to remotely connect to port 1521 directly. You can use a tunnel over port 22 (ssh) and create a tunnel within this session to your local machine so you can connect to localhost:1521 and communicate (via the SSH tunnel) with the database. 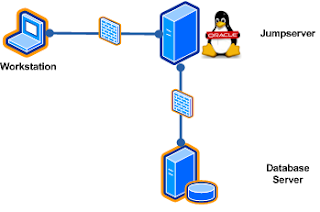 You will need to create a tunnel between your workstation to the “jump server” and from the “jump server” to the database server. This is in essence a double hop tunnel. To arrange this take the following steps: 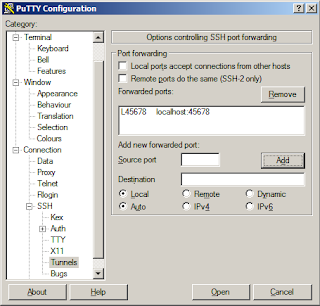 This should enable you to use Oracle SQL Developer locally by making use of a dual hop SSH tunnel to the database server via the “jump server”.
Posted by Johan Louwers at Monday, September 21, 2015