Face recognition more then only for security

Face recognition is something which triggers immediately recollections to the movie Minority Report for most of us. For some time is has been something from science fiction movies until a couple of years back when we started to find real-world face recognition in our day-to-day life. For people working in highly secured environments they have encountered it when entering restricted areas where a combination of an ID-card and fingerprint and face recognition stated if you could enter a secured area or not.

Today you see more and more face recognition  systems in combination with security. Companies like Artec and Biometry develop products to help companies and governments regulate access to restricted areas.

For the general public face recognition became something in their day-to-day life when social networks started to use face recognition to help you tag friends in pictures when you upload them to a social network. Facebook is one of those social networks that started to use this technology. For implementing it they received a lot of comments from the privacy community and goverment agencies.  On the Facebook blog you can find some more information on the why and how they implemented this option;

Because photos are such an important part of Facebook, we want to be sure you know exactly how tag suggestions work: When you or a friend upload new photos, we use face recognition software—similar to that found in many photo editing tools—to match your new photos to other photos you're tagged in. We group similar photos together and, whenever possible, suggest the name of the friend in the photos.

Face recognition is a controversial field and facebook has received a lot comments on using this feature and governments and privacy organizations have been pushing to remove this option. In some cases they have succeeded and Facebook has been forced to disable the feature and remove the data for face recognition as can be found in this article of the Daily Mail.

However, next to the fields of security and a help in tagging friends in pictures there are some other fields in which this is used. For example security forces use it to find and track people in public places, casino's as well use it to find people who cheat and pick them out of the visitors when they visit a casino again. Software vendors are using it to replace the standard username and password authentication for operating systems and phone's. We are most likely to much more coming our way as developers do have now access to opensource implementations of face recognition software via the OpenBR project.

A new way of using the algorithms to recognize a face is an implementation done by the people from Ditto Technologies Inc. Ditto has developed a system that scans your face and find the perfect matching glasses for you based upon the biometric information received from a scan of your face. 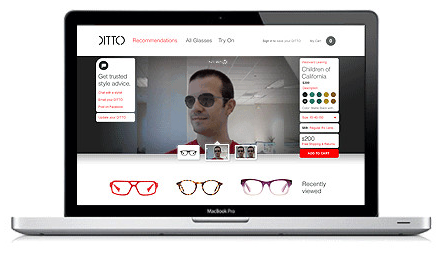 As we can see on the Ditto site, face recognition and the associated algorithms might be able to help us in other fields we did not think of yet at this moment. Picking glasses is just one of them. Looking at current tech startup companies we can see quite a lot of companies who are doing something with face recognition and this field will grow in the future even more.
Posted by Johan Louwers at Tuesday, March 19, 2013

Email ThisBlogThis!Share to TwitterShare to FacebookShare to Pinterest
Labels: algorithms